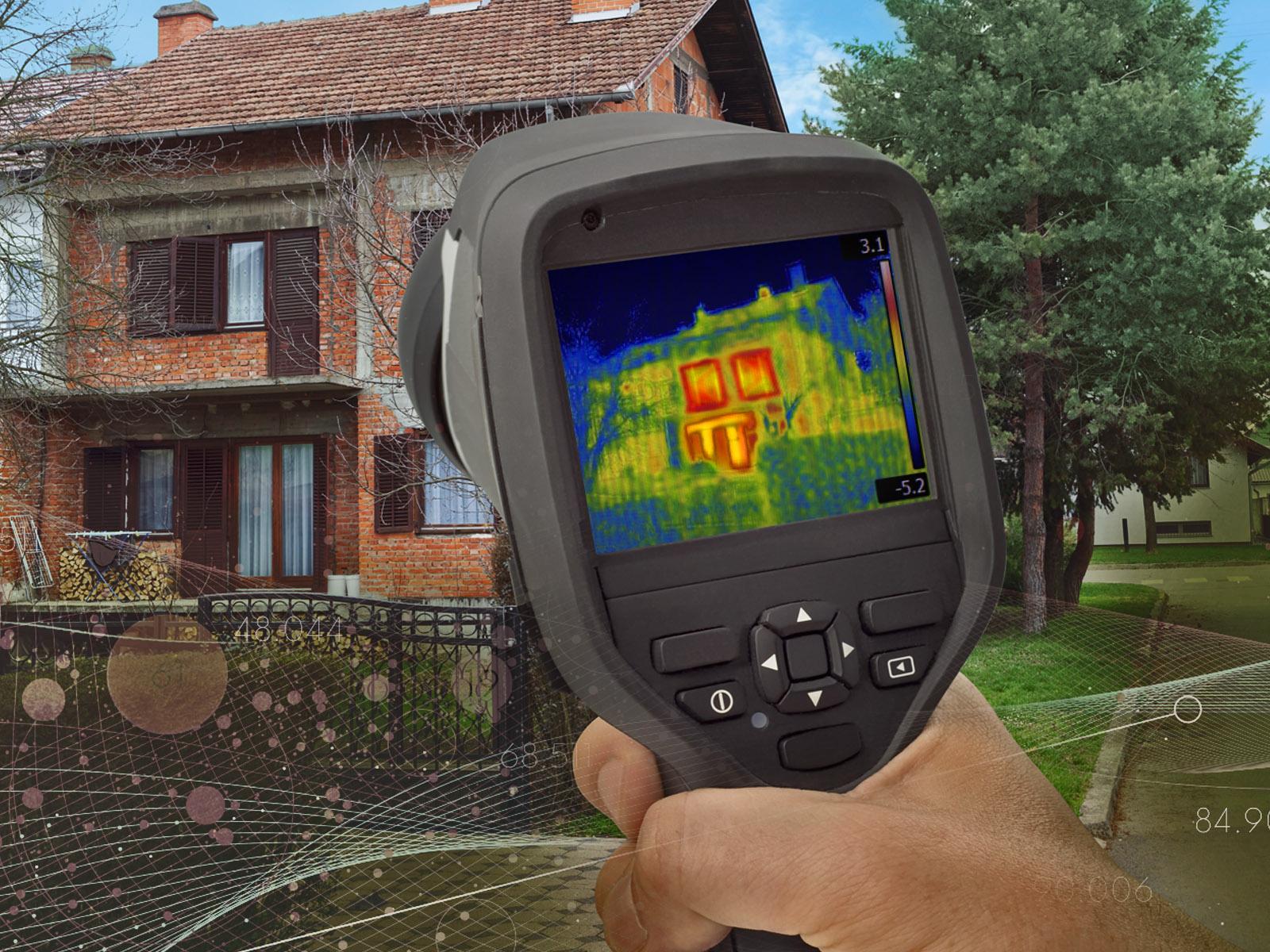 It’s time to make the switch to triple-pane windows. That’s the message from a series of studies led by the Department of Energy’s Pacific Northwest National Laboratory in collaboration with a coalition of public and private partners.

“Lower costs, greater availability, and the drive to reduce carbon emissions are pushing us toward a tipping point where triple-pane windows start making a lot of economic sense,” said Kate Cort, a research economist at PNNL and program manager for ongoing field validation studies of triple-pane windows.

It’s no secret that a home’s windows can waste a lot of energy. They can leak air, and even the latest models of double-pane windows contribute significantly to energy use and cost in a home. For a new home, windows typically make up about 8% of the exterior surface area but are responsible for half of the heat loss or gain. This passive energy loss makes windows a major contributor to home heating and cooling costs.

Meanwhile, evidence for the energy and cost savings of triple-pane windows has been slowly building for years, since the first prototypes were introduced around 1989. Previous studies have shown that triple-pane windows are more energy efficient than the industry-standard double-pane variety, but market adoption has been slow due to cost and availability.

Those downsides are about to change, said Cort. A new generation of thin triple-pane windows are less expensive and can be more easily retrofitted into existing double-pane frames. As their name implies, triple-pane windows have three panes of glass that create a double-decker sandwich, which gets filled with an inert gas, such as krypton, that provides additional insulating power. These next-generation windows take advantage of economies of scale provided by the same advanced glass manufacturing technology that churns out thin but durable TV and computer screens. 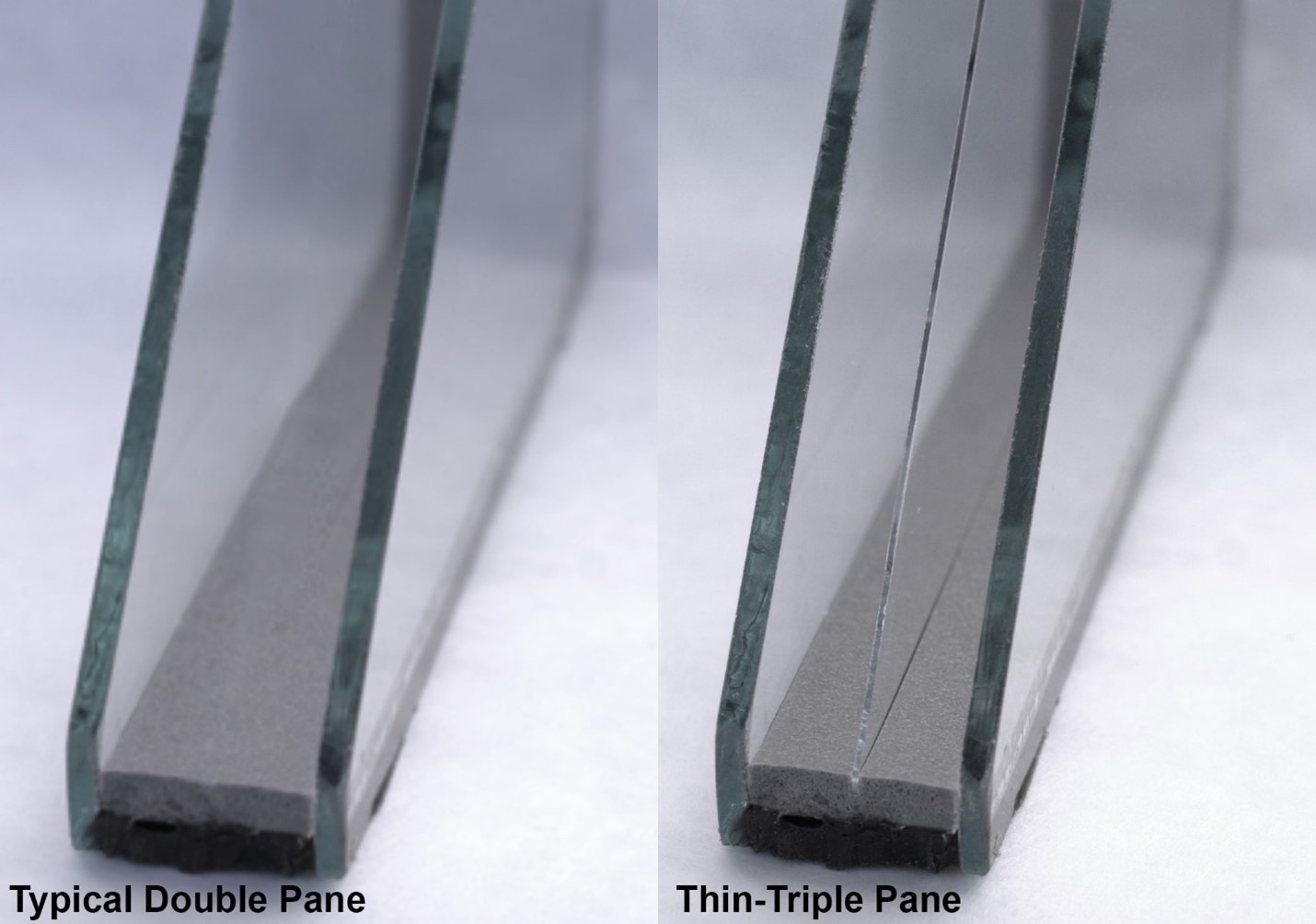 Over the past three years, Cort and her colleagues have systematically evaluated the energy savings and economic factors that will determine how fast they get accepted by builders. This work was supported by the DOE Building Technologies Office and the Bonneville Power Administration.

Now state utility regulators are beginning to take notice. Recently, the state of Michigan used data from a PNNL field study of triple-pane windowsto include them in the state’s technical resource manual listing of approved energy-saving measures eligible for utility incentives and rebates.

Another recent study led by Cort, PNNL colleague Edward Louie, and Robert Hart of Lawrence Berkeley National Laboratory showed that for new home construction, triple-pane windows can help builders affordably meet more stringent 2021 energy codes for new homes. Their study, published in the March 2022 issue of ASHRAE Journal showed that when a homebuilder upgrades the windows of a new home from double- to triple-pane, the energy efficiency performance of the windows can improve by 40% or more. This added performance boosts the total insulating value of the entire home exterior, often referred to as the building envelope.

“Our study showed that boosting the energy efficiency of windows provides builders with more flexibility in design and the ability to make tradeoffs with other components of the envelope, such as exterior wall insulation, while meeting code,” said Cort. The overall effect is to provide builders with more options and better assurance of building code compliance, while improving comfort for homeowners. 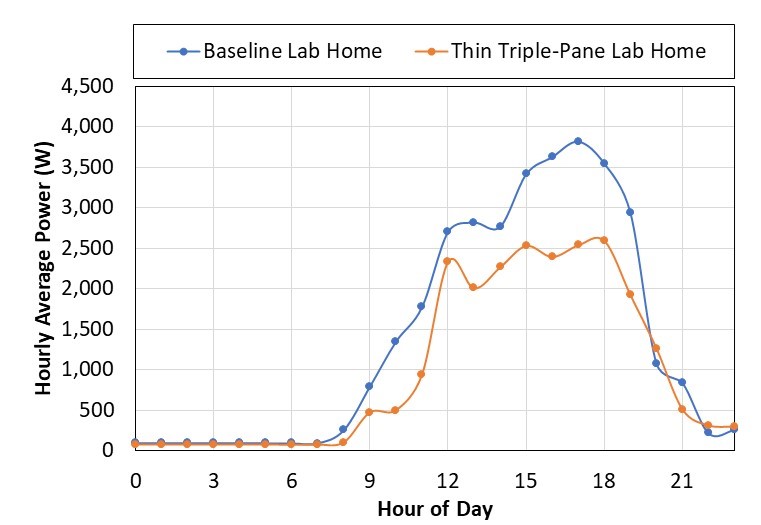 Thin triple-pane windows greatly reduced the power usage by the air-conditioning system in the hottest part of the day, compared with standard double-pane windows. The direct comparison was made in identical custom Lab Homes on the PNNL campus in summer 2020. (Graphic by Katherine Cort | Pacific Northwest National Laboratory)

What’s the hold up for triple-pane windows?

Builders play a key role in the adoption of new home building technologies, said Cort. In 2020, she and her colleagues interviewed 29 home builders who have participated in the DOE Zero Energy Ready Home program. They asked builders to explain their decision-making process for window selection during the 2018 to 2019 building season. Forty-one percent of these builders used triple‐pane windows in all their new homes and another 28% in most or some of their homes. For those who didn’t use triple-pane windows, the biggest factor was cost.

“The price differential between double-pane and triple-pane windows has been a pain-point for builders,” Cort noted. But she added that the increased incremental material cost of triple-pane windows is now about $700 to $2,400 for a 2,400-square-foot wood-framed home. This is about the same cost as adding an extra inch of rigid wall insulation to the same home.

Some builders also stated that the indirect cost of custom installation for triple-pane windows, which can be 25% to 50% heavier than similar sized double‐pane windows, also weighed into their choice.

“Most builders aren’t familiar with the newer thinner, lighter triple-pane technology,” said Cort. But the survey showed most would be willing to try them if the cost and availability made it practical for them.

Some of the builders Cort’s team interviewed noted that consumers like the comfort and quiet of triple-pane windows. A recent study confirmed that the installation of thin triple-panes reduced the sound infiltration by an average of 8-10 decibels when compared to the home with double-pane metal-frame windows, which roughly equates to reducing the perceived noise level by half.

“When someone comes into the house and you shut the door, it’s like getting into a Mercedes or BMW,” said a Seattle builder. “It’s so solid and quiet. We are building homes next to Boeing Field airport in Seattle. Planes are flying right overhead so close you can clearly see them from the houses, and it is so quiet inside you can’t hear them.”

When there are new approaches to home building, said Cort, builders need assurances that materials will be available when needed, hold up under use, and deliver on promised improvements.

To help meet those expectations, PNNL has joined forces with DOE, Lawrence Berkley National Laboratory, and the Northwest Energy Efficiency Alliance to launch the Partnership for Advanced Window Solutions. With support from DOE, this public-private partnership is working with builders, utilities, and manufacturers to both drive demand and scale up production of cost-effective “drop-in” thin triple-pane window designs and other high-performance window solutions. 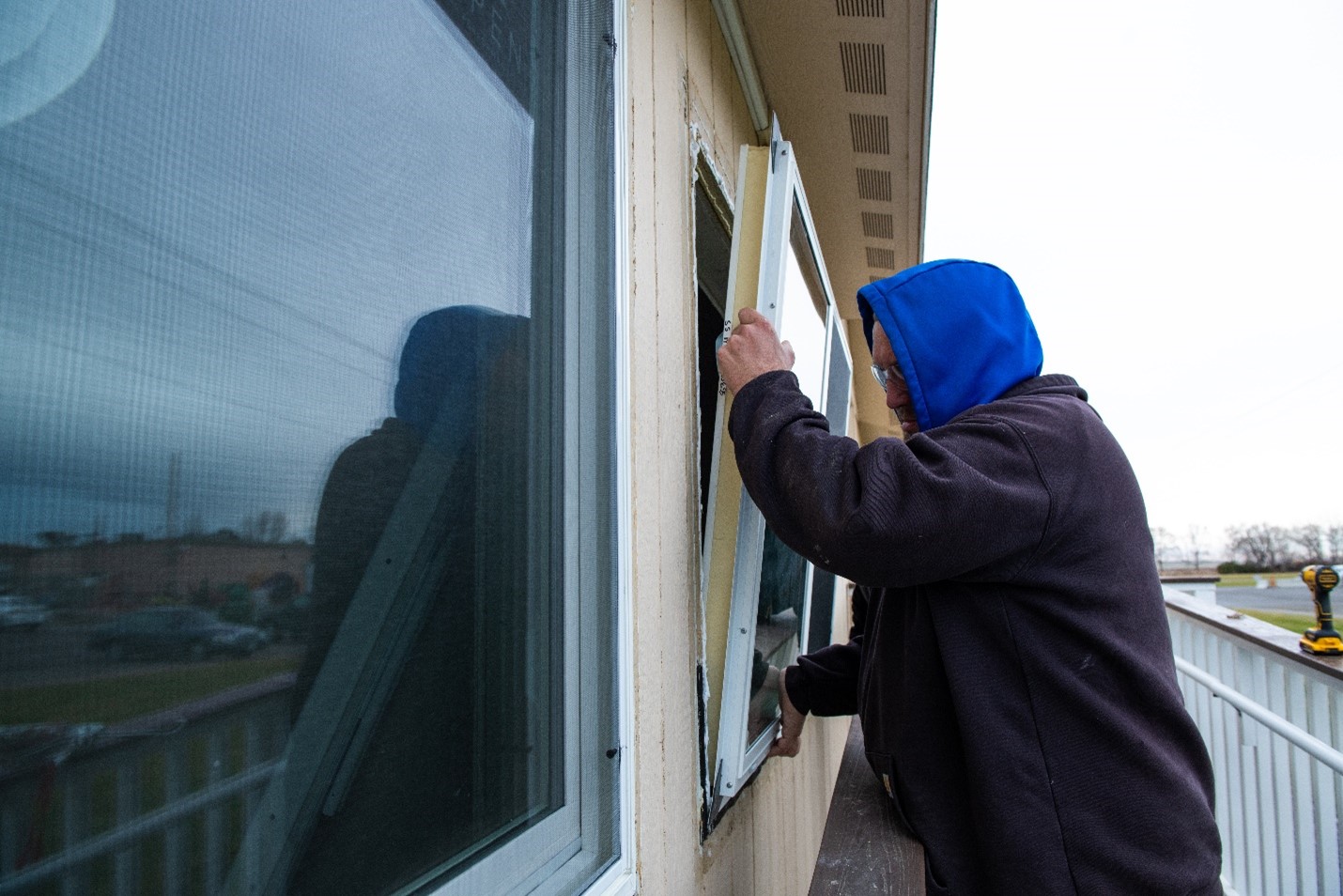 The PNNL team recently compared the energy efficiency performance of these windows in its Lab Homes, a pair of identical manufactured homes used to study energy efficiency. During the winter heating season of 2019 and the summer cooling season of 2020, researchers recorded energy usage and temperatures throughout the homes. During the two 10-week evaluation periods, the windows saved an average of 12% on heating and 28% on cooling for the 1,500-square-foot structures. In addition, the home with the triple-pane windows reduced outdoor noise and maintained much more comfortable and even temperatures throughout the home during both summer and winter testing periods.

The research team is now field testing the windows in 10 locations nationwide, from manufactured homes in Pasco, Wash., to a net-zero apartment complex in Rotterdam, N.Y. In these field demonstration projects, the incremental cost over standard ENERGY STAR® windows was $6 per square foot or less, said Cort. Within the last year, multiple versions of the thin-glass triple-pane units have been developed, certified by the National Fenestration Rating Council, and have become available to builders.

“At this point, it’s a matter of increasing awareness among manufacturers, builders, utility programs, and consumers,” said Cort. “It’s time to look at windows, not just through them.”