Impact at a glance

“The Cambridge team’s work on physical activity […] is having clear impact on DfT’s cycling policy development, and helping to make the investment case for cycling and walking significantly more attractive.”

We all know that exercise is good for our health, and that we should probably do more of it. UK Chief Medical Officers recommend that all adults do a minimum of 2.5 hours’ moderate intensity activity each week, yet in reality only around 66% of men and 58% of women manage even this. Insufficient physical activity is a major contributor to poor health not just in the UK, but worldwide. 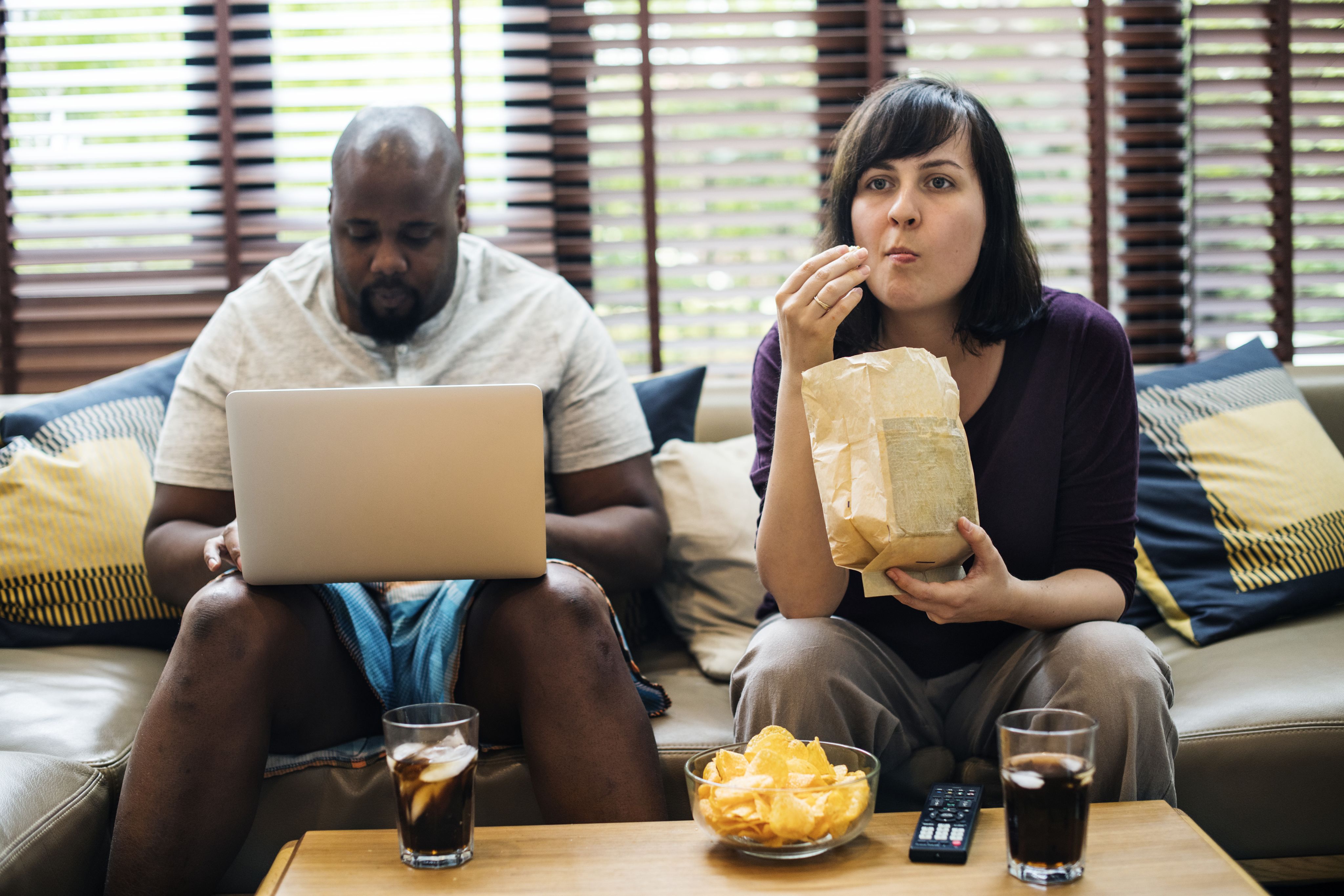 Willpower alone is not enough, it seems. What we need is for someone else to make exercising easier for us. Researchers at the University’s Medical Research Council (MRC) Epidemiology Unit envision a future where being physically active is designed into our towns and cities – where everyone, regardless of age or socio-economic status, can get around on foot or by bicycle safely and easily.

“Activity as part of a journey, such as the commute to work or for transport in general, offers a comparatively easy way to integrate exercise into daily life,” says James Woodcock, Professor of Transport and Health Modelling at the MRC Epidemiology Unit.

Researchers in the Unit’s Population Health Interventions and Public Health Modelling programmes have shown that the way our towns and cities are designed can have a huge influence on the way we get around – and that a properly informed design can encourage more of us to be more active. They call this ‘active travel’ – something more likely to get more people routinely exercising than solely promoting sport as exercise.

“Regular physical activity is important in the prevention and treatment of many diseases,” says Jenna Panter, a Senior Research Associate in the Population Health Interventionsprogramme. She adds: “Our research has shown that commuting to work on foot or by bike, even for part of the journey, reduces the risk of heart attack and stroke. This is an important message for clinicians advising people about how to be physically active and reduce their risk of disease.”

“Physical activity also reduces the risk of diabetes and some cancers, and plays a key role in controlling risk factors like high blood pressure and obesity. And it’s associated with improved mental health, delay in the onset of dementia, and improved wellbeing. So we really need to get everybody moving more.”

Panter and colleagues evaluate the health impacts of major environmental and policy changes, such as the Cambridgeshire Guided Busway – a 22km bus track with an adjacent traffic-free lane for walking and cycling – and  the Connect2programme of new walking and cycling routes at 79 sites around the UK. They have found that this type of infrastructure can increase the overall amount of physical activity people do by around 45 minutes per week. It also encourages people who are less active to walk or cycle more.

“Our findings add to the growing evidence supporting the case for changing the environment to promote physical activity – by making walking and cycling safer, more convenient and more attractive,” says Panter. 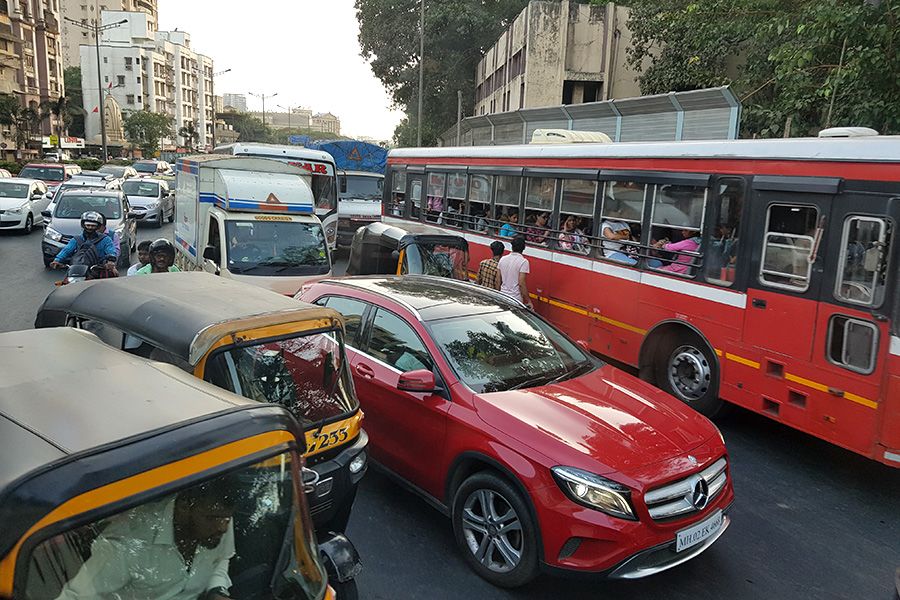 The researchers are now trying to understand how the conditions within different cities might alter the effectiveness of these interventions. In many cities, particularly in low and middle-income settings, the walking and cycling environment is poor. Footpaths may be either absent or obstructed by street vendors; there is fast unregulated traffic, and danger from crime. This means that people walk or cycle out of financial necessity rather than choice.

According to Public Health England, the UK population’s lack of physical activity directly contributes to 1 in 6 deaths and costs the UK £7.4 billion a year. This huge figure suddenly makes investing in more cycle- and walking-friendly towns and cities seem very worthwhile.

But in order to redesign transport to improve population health – and reduce health inequalities – policymakers need not only robust evidence that it works, but also tools to help them plan it. It’s complicated because of the many variables that must be weighed up against each other.

The Cambridge team has created the Integrated Transport and Health Impact Modelling Tool (ITHIM), and other models to assess the health effects and trade-offs of different transport scenarios and policies. Typically they look at physical activity, injury risk, and air pollution exposure, sometimes including noise pollution.

“Air pollution levels and the risk of injury from walking or cycling vary massively across the world,” says Woodcock. “In Cambridge, cycling is pretty normalised, and injury risk and pollution levels are low by global standards. While air pollution is a problem, the harms from the additional pollution you breathe in while exercising are much smaller than the benefits from being physically active.” 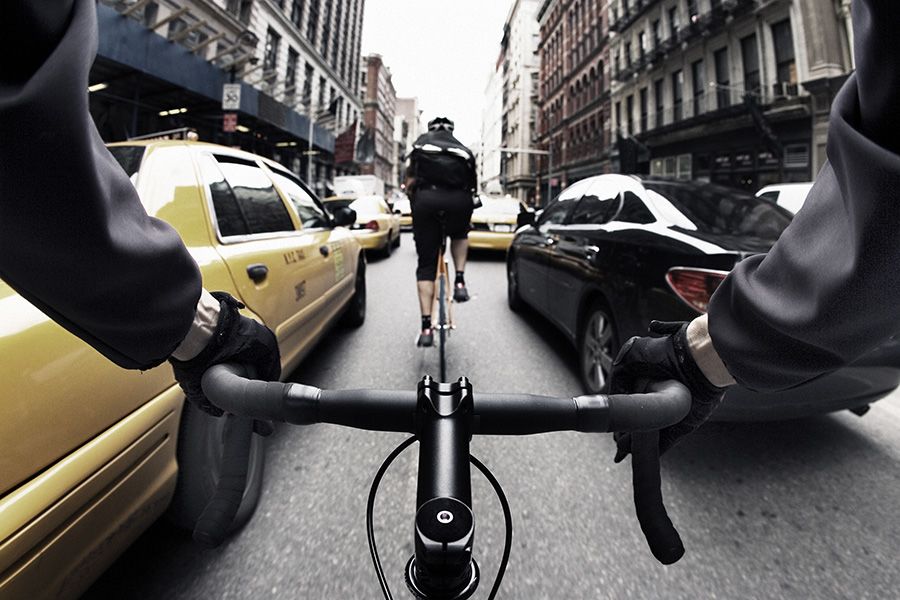 “We found that, even in a highly polluted environment, doing some physical activity is better than none,” he adds. “However, people who are active for much of the day, like bicycle delivery riders, will be breathing in a lot of extra pollution and they don’t have much choice about this. By reducing air pollution concentrations we can increase the benefits of physical activity for everyone – and that’s where our tool can help guide policy-makers’ decisions.”

Likewise, the risk of injury from active travel varies widely from place to place. The team’s data shows that it’s safer to cycle in The Netherlands than it is to drive in most Latin American cities.

“There is a lot we can do to reduce injury risks,” says Woodcock. “The ‘Vision Zero’ campaign says there is no acceptable level of death and serious injury caused by traffic. We need to reduce traffic volume and speed, and that’s what policies like ‘Low Traffic Neighbourhoods’ are trying to do. Where that isn’t possible, we need protected space for cycling.” 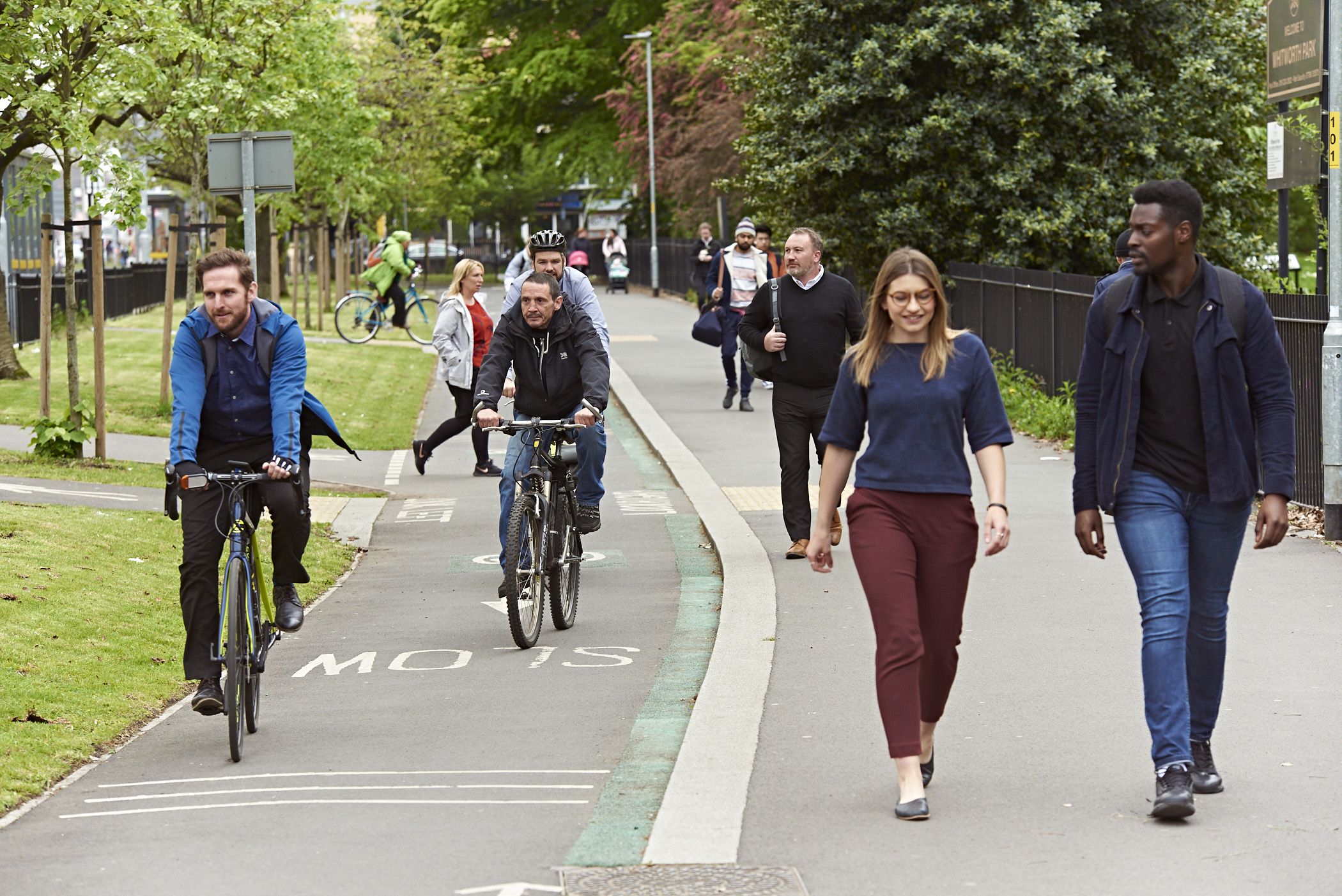 Woodcock and Panter are involved in projects to evaluate the impact of Low Traffic Neighbourhoods – schemes that stop people in motor vehicles cutting through residential streets. The aim is to encourage walking and cycling by making it safer and more comfortable, and to make driving less convenient. Their projects will compare how volumes of walking, cycling and driving change after new Low Traffic Neighbourhoods are built in various London boroughs – examining impacts both inside and on boundary roads.

ITHIM was first developed for use by researchers and policymakers in England, and has now been taken up and used in different ways in countries across the world. The Cambridge team worked closely with the California Department of Public Health, for example, to help it develop its own version of ITHIM. This was implemented in the San Francisco Bay Area, and in southern and central California. Following its success in California, ITHIM has been implemented by health and transport authorities in at least six other US states.

ITHIM also became the first tool of its kind to be used in low- and middle-income countries. Working with the World Health Organisation (WHO) Urban Health Initiative, the Cambridge team adapted ITHIM for use in countries including Malaysia, Ghana, India and Brazil. It is now shaping debate around transport and health in these countries, enabling collaboration between transport and health practitioners, and aiding local decision-making by quantifying the health benefits of transport interventions.

“Different versions of ITHIM have influenced transport policies in cities in the US, Latin America, Africa and India – it’s very gratifying that our work is having an impact in so many different places,” says Woodcock. 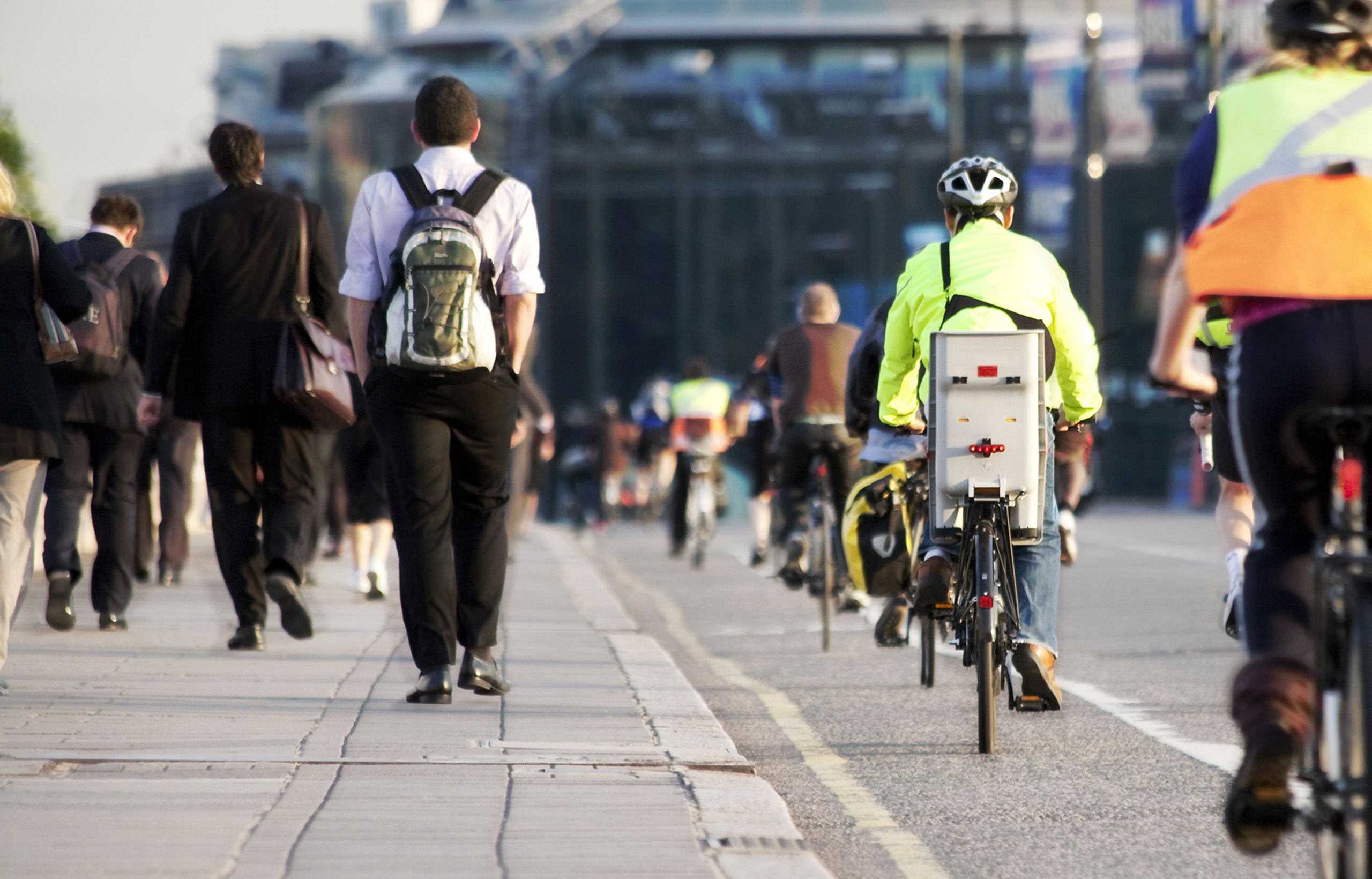 Alongside ITHIM, the Propensity to Cycle Tool (PCT) allows policymakers and planners to visualise the potential for cycling in any region of the UK, from the scale of whole cities to individual roads. It shows not just where cycling is currently common, but also where there is most potential to increase cycling, and where the health benefits would be greatest.

The development of PCT was led by Woodcock’s Cambridge team, in collaboration with researchers at Leeds and Westminster Universities. It was co-produced with the Department for Transport as a free, interactive web tool, with the benefits outlined by the team in a short film.

The Propensity to Cycle Tool (PCT) for England and Wales provides an evidence base to inform cycling investment.

“The PCT helps transport planners see how to improve the infrastructure or provision for cyclists at many levels, from whole regions to specific points on a road network,” says Woodcock, adding, “the primary aim is to give local decision-makers information about where to invest, by showing where the cycling potential is greatest.”

“The primary aim is to give local decision-makers information about where to invest, by showing where the cycling potential is greatest”

“We model how much cycling we think there could be, based on the numbers of people making a trip for commuting or school, and the distance and hilliness,” says Woodcock. “And from that we also provide estimates of how greenhouse gas emissions would change through reduced vehicle use, as well as physical activity changes and health outcomes in adults.”

Following Department for Transport (DfT) recommendations, the Propensity to Cycle Tool has already been used by 81 local authorities across England to plan cycle networks and identify interventions that will promote cycling. These new investments have the potential to produce over 335,000 new cycling commuters. In environmental terms, this increase in commuting by bicycle decreases CO2 emissions by over 55,000 tonnes per year.

In Greater Manchester, for example, the tool has been used to inform cycling investments and create the ‘Bee Network’ plan. The aim is to revolutionise travel across the city-region and make active travel the most attractive choice for getting to work, school and the shops. It will ultimately comprise 1,800 miles of walking and cycling routes at a cost of £1.5 billion, but will return an estimated £6 billion in health, social and air quality benefits. 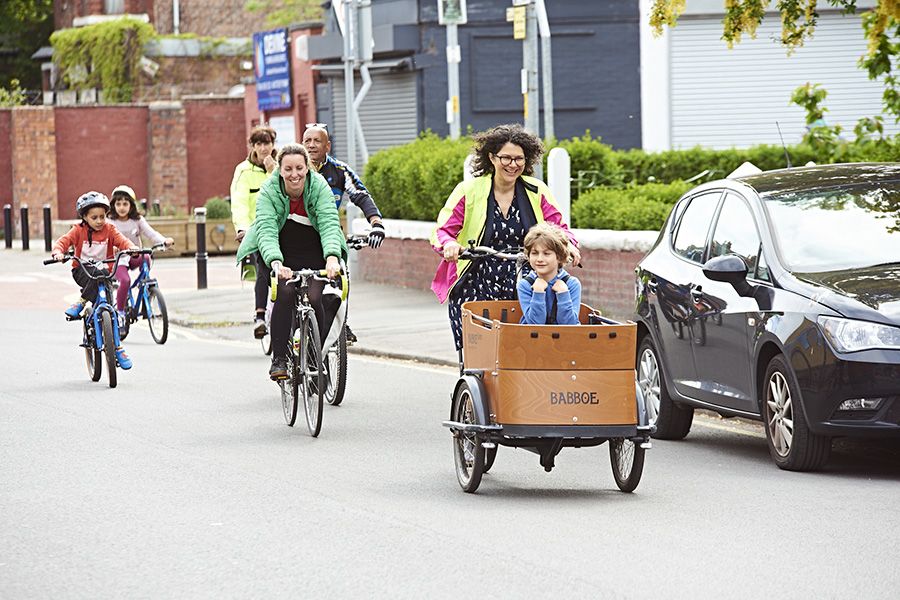 Woodcock says that national guidance has been transformed in the last decade: “Where the guidance used to have a picture of a man wearing a helmet trying to navigate a dangerous traffic environment, there’s now a recognition of the kind of environment needed for inclusive cycling throughout the life course.”

Through long-standing relationships with transport policymakers at every level, the Cambridge team has ensured that its research is embedded in UK government guidance spanning transport and public health. The DfT has revised the way it calculates the financial benefits of living longer and healthier lives – enabling it to make a stronger economic case for walking and cycling. This, in turn, has underpinned local investment decisions.

Already, some areas have implemented ambitious walking and cycling improvements – and are seeing substantial improvements in physical activity and reductions in injuries. And the economic gains projected from plans now in progress are huge. The health benefits of investments made using the PCT alone equate to a gain of 2,632 life-years and 340,234 fewer days’ sickness absence each year – with a total economic value of approximately £200 million annually.

The vision of safe walking and cycling routes for all is gradually moving towards reality – and making it easier us to enjoy more active, healthier lives.

…visit our interactive map to find out how.

Published February 2022. The text in this work is licensed under aCreative Commons Attribution 4.0 International License.